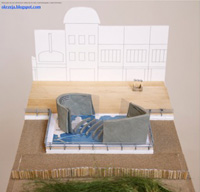 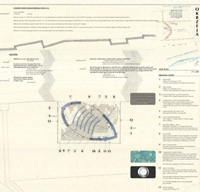 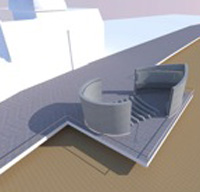 The proposed Memorial evoked three aspects of the role of the Ship:

• the refugee ships such as the ill-fated M.S. St. Louis, whose Jewish passengers were refused a haven in America in 1939

• and the passenger ships which brought the remnant of survivors to America to begin anew.

Quotations and text which cross-connect these perspectives were stamped on the interior of the hull providing a focus for contemplation from six rows of meditation benches. Eighteen, the Hebrew numerical of 'Life', was repeated in dimensions of the Memorial design components:

• highest point of the Ship's bow

• length and height of the meditation benches

A diverse selection of voices allowed this Memorial to stand both as a witness to our collective past and as a barrier to its repetition in other contexts.